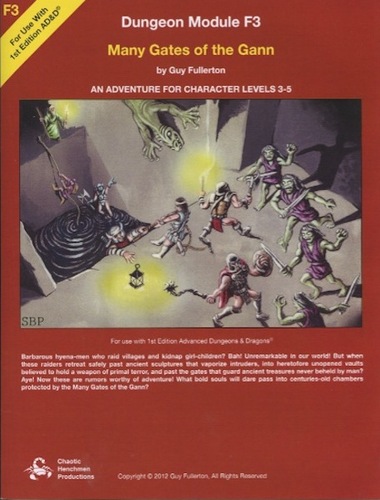 Many Gates of the Gann by Guy Fullerton of Chaotic Henchman is that rarest of rare OSR, a product that perfectly captures the spirit of classic modules like Expedition to the Barrier Peaks and Lost Caverns of Tjocanth without ever feeling like a derivative piece of shit. Whilst the community is eager to heap praise on mediocrities or artsy tossfiddle, Many Gates of the Gann threatens to fade from memory and is seldom mentioned with the reverent praise and tear-stricken adoration it rightfully deserves. No more I say! Light the Beacons! This module NAILS what made AD&D 1e awesome and what it was all about. Someone give Guy Fullerton a blowjob (Kent!), well fucking done.

Many Gates of the Gann is a 30-page, 3-level, 120-room dungeoncrawl extravaganza of traps, secret passages, riddles, monsters from the Fiend Folio, bands of humanoids that can/must be bargained with, weirdness and some goddamn treasure. It is for 5 to 7 characters of levels 3-5. The style is so reminiscent of AD&D you could probably slot it neatly into a Greatest Hits Greyhawk campaign without ever breaking flow.

Many years ago a traveller named the Gann came to the world, seeking to sequester a weapon of terrifying potency. He did what most of us would do, construct a subterranean fortress to protect it, complete with autonomous defenses and servitor ape caretakers so it can run without him indefinetely. However, a recent earthquake has shaken things up a bit, and now Gnoll raiders are kidnapping young womyn and taking them into the complex at the behest of unknown, but terrible masters. Enter the PCs.

As I said, this thing rocks. It all starts with a good entrance into the dungeon proper. Two great stone ape faces flank a stone door. When the complex defenses are activated, they will fire obliterating red rays from their eyes. Weird science fantasy approaching woo hooo!

It all continues with a brilliant map. Multiple doors and corridors branching off in different directions, loops allowing for nonlinear exploration, strategically placed portcullises that REQUIRE you to trick the guards standing behind them in some fashion so as to raise them or figure out the way the servitor apes communicate with eachother. One way doors force you to map alternative routes. Secret doors in all the right places. Spy holes allowing you to gain information about other areas. Levers that open doors elsewhere in the complex. Silvery gates deep in the complex leading to another adventure site of choice. This is textbook great stuff.

Many Gates of the Gann is possessed of an almost platonic verisimilitude. There is a logic and a design behind the Servitor Apes and the way they interact with the structure that is not included just so the author may show off but so it can be mastered by the players and utilized. The Servitor Apes that are a frequent occurrence are not automatically aggressive and respond to a series of whistles. Figuring out the whistles means you can provoke certain responses (key to penetrating the second level!).

Monster use is great. A steady diet of servitor ape, gnoll, grimlock spiced with all manner of non-obvious choices from the Monstrous manual, monstrous manual 2 and the Fiend folio. Cifals, Smoke-para elementals, Sandmen, Grell, a pseudo-ghoul. Monsters ambush or are hidden somewhere, they never just sit in a room waiting for you to kill them.
Humanoid tribes have motivations and use intelligent tactics, opening up the possibility for some faction play or interaction. Ashkasar (guess what he is I dare you) is a sadistic immortal monster that merely seeks to indulge his own cruel whims but he uses trickery and deception.

There is a subtlety to the writing. The way the module hints at the origin of the Grell by having them spawn from crows with gigantically distorted brains. Riddles that are subtly telegraphed and hinted at. It is hard to put my finger on but it helps to create immersion, as though the dungeon is embedded in a larger world WITHOUT MAKING IT UNSUITABLE OR DIFFICULT TO DUMP INTO ONES HOMEGAME.

The module introduces a new monster, the Zerpanaktes, one of the other major antagonists in the adventure. Giant serpent that fuse with their thralls and require humans for pro-creation? Awesome. Just the type of unlikely horror that made DnD delicious.

I could wax lyrically about this thing for time immemorial…and thus I shall. The treasure is great too. Not just because of the variety in terms of both mundane and magical treasure but also the way it is placed. Hidden in various nooks and crannies, contained in delicate phials under a 2000 lb. quartz plug, down hidden shafts, behind secret doors and inside invisible backpacks etc. Someone actually read the old brown books on treasure placement for a change. Little details are added that make the treasure come alive.  wand of illumination (62 charges; made of magnesium alloy in the shape of a gigantic sewing needle; command word is “eye”). Nowhere does the adventure feel formulaic or overly mechanical, the treasure makes sense but not TOO MUCH SENSE.

Environment, treasure, adversaries, obstacles and general weirdness combine to create a magnificent (albeit deadly) place to explore. Success is by no means a guarantee. The module does not chicken out, if you find the mysterious Annihilation Seed immense power is placed in the hands of the players (though if you get this far you probably deserve it).

The presentation is great, the production value is professional and reminiscent of the old modules (albeit it with superior layout). It should be noted this module is large and might require multiple readthroughs, or at least a thorough readthrough for each level, so the GM has an understanding of the major players and certain obstacles and the purpose thereof. Some rooms require prior knowledge and reading the descriptions on the fly means a slowdown in gameplay to avoid the omission of crucial elements. The humanoid layers in particular need to fully absorbed prior to the pc’s encountering them. These could have used a side-bar or something.
Once you have absorbed it you have an amazing amount of content condensed in only 30ish pages. Contrast with the execrable Blood in the Chocolate, which takes about 55 pages to give you 25 rooms, most of which are filled with either machinery that cannot be meaningfully interacted with (although this is DnD so one could posit everything can be meaningfully interacted with) or endless fucking identical hordes of pygmies. This thing is what, 6 fucking dollars?!?

What strikes me time and again is the style of the adventure. The module fits neatly into the format of the best of the AD&D modules without mindlessly copying some of their flaws. You could easily place this in a Greyhawk or oldskool vanilla DnD campaign and none would be the wiser. I’d say this adventure is perfect for anyone who liked AD&D, Expedition to the Barrier Peaks in particular, and wished there was more of it. There you go sir! Fresh off the press. Get it while it is hot: A complex, beautiful and deadly dungeon, complete with mild science fantasy elements without getting too wacky.

Pros: Everything a fan of the classic AD&D dungeoncrawling modules could ever hope and dream of. The disciplined work of a true dungeon master.

Cons: Requires fairly intensive prep. Eventually the module ends and you must return to the drudgeries of a meaningless life bleached of color and joy

Final Verdict: Teaches us that we can be better elfgame players then we are, that is not dead which can forever lie and Saint Gygax has never left the hearts of the faithful. A tip of the hat to Guy Fullerton. Well done! 9.5 out of 10.