A blog that only kills animals. 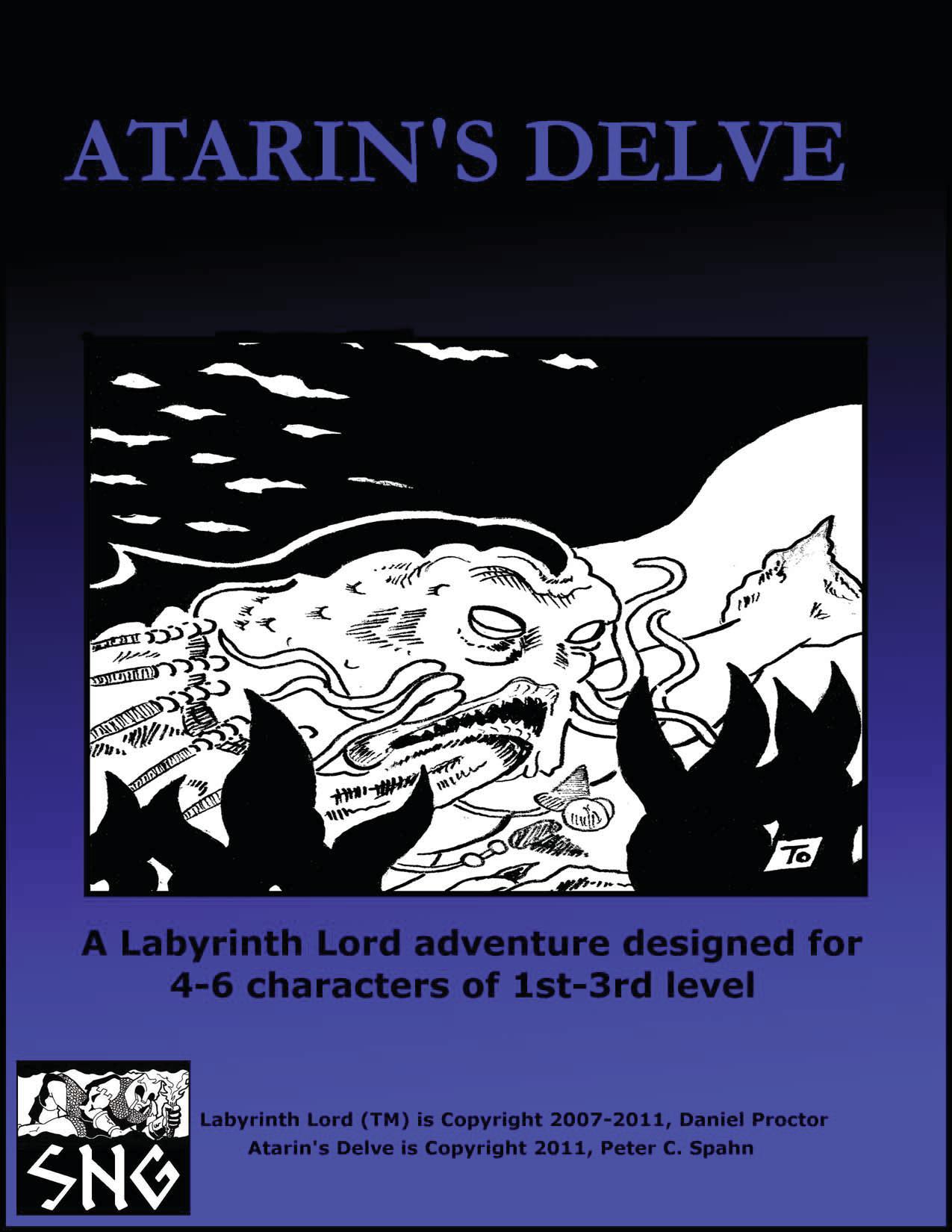 Atarin’s Delve is the fourth adventure for the Chronicles of Amherth setting and it is the weakest entry in the series. It’s not a bad adventure but its inconsequential when compared with entries like Blood Moon Rising or the stellar Inn of Lost Heroes. The adventure is only 12 pages long but it’s how you use those pages that counts.

The backstory is too long and elaborate for the length of the adventure. A very fucking long time ago, a tribe of ancient fish-people [1] clashed with some humans in a cave. The humans prevailed by the might of some wizard and turned the water to stone with the fish-men still in it. However, they survived via some vague affinity with the water and are instead only in suspended animation.
THEN a crazy aristocrat finds the caverns while digging his burial tombs and proceeds to start a Cult worshiping the bizarre fish-lady the Cathla pay homage too, complete with sexy fish lady drawings and orgies. And then he dies by hitting his head on the side of a basin. His house slowly falling in disrepair, the rest of the nobles occasionally meet in the caverns, and one of them pawns off the Cathla artifacts to cover some debts, attracting the attention of an archaeologist. (Deep breath). The Archaeologist traces the stuff back to the cave, starts poking in the cave, inadvertently wakes up the fish-men during the excavation just as the Cult decides to murder him, and everything turns to shit in the caves whilst his apprentice has set out for Capital City land to get authorization and some guards to excavate the place fully (takes inhaler) . The Local Adventurers Guild (UGH!) has selected YOU!!! DA HEROES! to oversee the excavation. When they arrive on the site, they discover only the cold remains of his camp and the sweet sweet promise of bloodshed.

Do you see how much backstory was required for a 15 room dungeon? Not a promising start. There are two entrances but it is extremely likely the party will enter via the caverns the archeologist was excavating as they are clearly marked with a flag. The map is actually good (credit goes to the superb Dyson Logos), avoiding any hint of linearity in favor of winding, branching passages, secret doors and appropriately interconnected caverns.

The room descriptions commit a cardinal sin by spelling out exactly what the purpose of the room ONCE WAS and was once used for before moving on to the actual content now. But what the rooms were once used for is hardly relevant to the rest of the adventure. Look at this example:

4. Main Hall
Once the main gathering place of the cathla tribe, the cultists have turned this chamber into a ready room where they prepare for various lakeside rituals. The walls are covered with murals portraying beautiful blue men and women with webbed hands and feet, cavorting shamelessly through the water under the lustful gaze of the Blue Lady. This was a depiction of cathla life, as envisioned by Lord Apperson.

A huge set of bronze double doors set in the east wall leads to the High Cave (see Places of Note, above) above the shores of Lake Onzetta. These doors are unlocked and open outward. During holy days, the cultists used this chamber to disrobe, sing, dance, engage in pleasures of the flesh, and then stream naked through the doors to leap into the waters below. It was during one of these rituals that Lord Apperson slipped during his jump, hit his head on the rocks, and drowned in the lake.

So much text is occupied with having the room make sense in the context of the story and so little is devoted to its current place in the adventure, and this is something you see all too often in Atarin’s Delve. It’s like the backstory, instead of facilitating an interesting place for adventure, has turned into a yoke that weighs it down.

The contents of the dungeon are not too spectacular, it’s all very naturalistic. Besides discovering the scholar, who has barricaded himself inside a room (storing his water in rags so the Cathla can’t get to him), there are some guardian lizards, a few surviving aristocratic cultists (providing an opportunity for treachery), the Cathla themselves and the newly undead lord Apperson. The undead status of Lord Apperson (because of sloppy editing it is not really clear whether he has animated as a Ghoul or a type of Nautical Undead seen before in Spahn’s adventures) feels tacked on and is left unexplained. The best encounter is probably with some sort of sacred Catfish in a reflecting pool, and even that one is essentially combat encounter.

The random encounters are similar to those of Pyramid of the Dragon, but a lot weaker because they are more inconsequential, reaching the level of nuisances in places. You trip and fall, you step into a pile of fungus and attract some beetles, you get swarmed by bats etc. etc. It fulfills the basic conditions of random encounters by adding a timed resource depletion mechanism but its all disconnected from the rest of the adventure.

What else? There is no treasure except a well-hidden fish-goddess statue made of silver. What the fuck man? You can probably clear this thing in a single session. Go inside, tussle with some lizards, slip and fall, find scholar, have one GREAT surprise when the Cathla teleport out of your waterskins and start fucking shit up, kill them, MAYBE find the cultists and get some interesting roleplaying/treachery shit going on, rescue Atarin (or he dies whatever) and then the adventure is over and there is no specified treasure.

I would be remiss if I did not point out the wasted opportunity of not capitalizing on the abundant bodies of water by describing some sort of flanking teleport tactic the Cathla can use against the PCs. I will give the adventure some credit for enabling some sort of roleplaying opportunities by giving the Cathla a logical objective but whatever. The adventure is not terrible but its very average. It doesn’t have the punch of other short adventures like Purple Worm Graveyard, Tales of the Scarecrow or The Pale Lady.
It is, at best, average, and in Princeland we kick those to the curb.

This type of module hurts the most because I can’t really get worked up about it. It doesn’t really have a reason to exist in a market that is PACKED with exceptional adventures so unless you are a dedicated Chronicles of Amherth Fan or a completionist this one is not really worth your time. It’s not a bad module, it’s just not good either. 4 out of 10.

[1] The Cathla are a race of fish people that once mastered great elemental magics. Whatever lingering potential remains allows them to transport themselves between two bodies of water instantaneously. Reminds me of the Creature Catalogue for some reason.