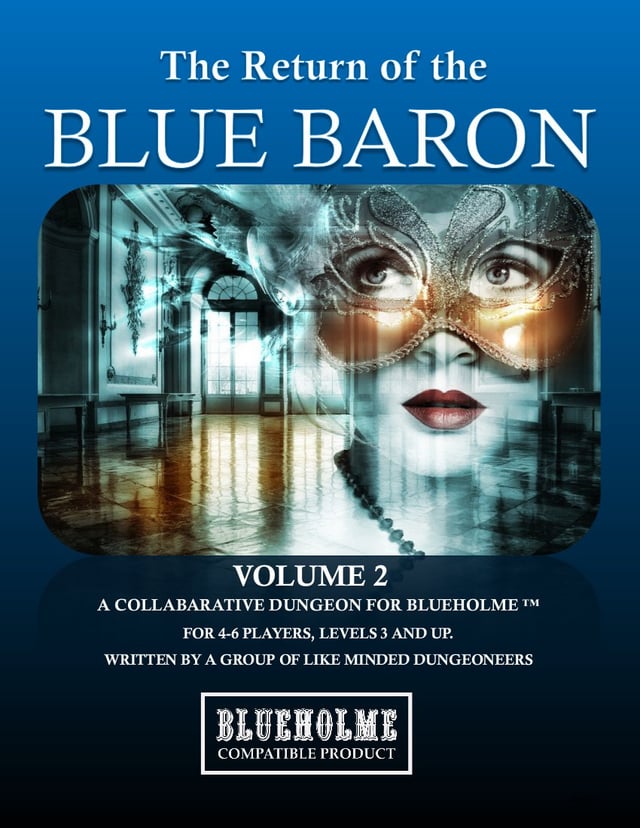 After reviewing An Invitation of the Blue Baron I was intrigued enough to check out the sequel. Twice as big with contributions from both new faces and old hands, it surpasses its predecessor in every regard.

It is eight months after the Blue Baron had his fete. His darling wife, the Lady Keiner, is fed up with her husband’s tax dodging escapades, fearing retribution from the Queen and thus promptly offers to assassinate the poor man in exchange for the deed of his lands. After he has been poisoned, she receives a letter from his Court Wizard, telling her she has been cursed and only he may remove it, giving her until the full moon to find his body in the tomb he has been constructing with the tax funds below the town or suffer the hideous effects of the curse. And she has to host a contest to do it!

The backstory, while a little too long, is unconventional and fun, brimming with high fantasy and whimsy well suited to the extravagant figure described in part one.

The format of RotBB is a dungeon crawl with rooms by different collaborators like its predecessor, but several elements are added to spice things up, rendering the whole a superior effort. The module makes the time to set up its premise, giving the players an invitation and a description of the town of Einhornstadt.

You’re not the only newcomers here, either. Bands of foreign merchants, rakes, and mercenaries are hustled along by pairs of city watchmen as the press of people thickens. The watchmen eye a gypsy troupe putting on a puppet show and telling fortunes at the
back of a wagon. An overdressed nobleman with a trained hunting cheetah holds court for a train of sycophants across the way, spied on by giggling children over a garden wall. Most of these visitors amble along with you down Main Street to the town square, where a growing crowd gathers in front of a high wooden stage.

Players get the chance to banter a bit, buy some equipment, gather rumors and chill out before the Lady Maria Keiner appears to announce the contest and introduce the time limit. Rumors are done in character, which I always appreciate.

You know if I was you guys, I’d just march right back up to the front doors of the castle and ask for more money! OH and if you’re at it, can you toss in a barrel of ale for myself? If it’s not too much trouble.

The set up almost reminds me of Gone Fishin, the way it manages to capture a festival or tournament atmosphere. After the contest is announced, the entrance to the tomb must be located first, again delaying gratification and getting the players intrigued. Who doesn’t like a concealed entry. Its classic!

There are several unconventional elements in this otherwise straightforward dungeoncrawl. There is a time limit of three days, and the module provides some house rules for modelling sleep deprivation, since players will in all probability try to cut their sleep. The adventure also locks the players inside the tomb (meaning they must locate an exit) and gives them a definite objective, finding the hidden location of the Baron’s body.
The result is likely to generate a significantly different approach to the tackling the dungeon then your standard dungeon fare, which I appreciate immensely.

What would have ruined this awesome premise is if the Tomb were either too easy or too hard to reach. Instead RotBB nails it, the tomb is placed in a very obscure location that only veterans of the entire Sierra adventure game catalog are likely to figure out by just visiting the room itself, but there are SEVERAL alternative means of finding the location of the tomb deeper into the dungeon. In fact, if the players were to explore every room, finding an entity that knows the location of the Baron’s body is virtually assured.

To add to the spice, the PCs have a rival, the Holmesmen, a band of fightin’ men led by a ruthless Conjurer with a ring of invisibility that are already present in the tomb, making it possible the PCs can be outfoxed in their search for the location of the Baron’s body. There is a relatively simple mechanic that makes it increasingly likely the PCs will run into them as time progresses.

The 2 level dungeon proper is more tonally coherent then IotBB but still oscillates between disturbing, horror and magical buffoonery from time to time. The random encounter table says it all. Giant Strangler Salamanders, Scabrous Nyak-Vhom, Nightmarish horrors from between the planes, Glass Wasps, wandering Mastiffs.
Bizarre, otherworldly horror, clashing strangely with the second Dungeon level with its orcs, kobolds, berserkers and other bog standard entries.

The map is similar to that of most of Shane’s maps and thus it is fine if simple, squares and rectangles connected via a variety of paths. There is a plethora of secret doors to ensure you will get maximum use out of your elf or thief class. A sprawling nonlinear maze of puzzles, traps, wonder and horror. Classic DnD oozes from every blue-edged 10 foot square.

There are two irritants. The room numbering is, begging Mr. Ward’s pardon, utter dogshit, with players entering in room number 3. and rooms with only one number apart being found on opposite sides of the dungeon. The decision to simply start at the left side of the map and then number rooms in rows from left to right makes it harder to get a feel for what rooms belong in what area. Numbering should go by proximity.

The second is a recurring villain for this series. I call it “room descriptions of hallways or outside doorways that kick in 10 feet before the GM has started reading them since there is no way to tell one should start doing so from looking at the map.” I don’t know why this dastardly villain keeps getting included in the Blue Baron series since I consider his presence to be unusually cruel to novice GMs but there I go again with my dreams of a just and balanced world.

Room entries are overall very strong, and considering there are at least twice as many rooms as the previous entry, this is a sublime achievement. Where some of the rooms in the first part where poorly balanced, nonsensical or too long, the vast majority of the rooms in Blue Baron are Absolute Balls to the Walls Gonzo Hypermagic Fun, with only a few questionable rooms or joke reference rooms included. The balance between INCREDIBLY DANGEROUS AND EXCITING ROOMS and calm, subtle, atmospheric rooms has also been improved, making the whole feel surprisingly balanced [0]. The odd puzzle or secret door to discover makes a break from being bombarded with enchanted daisy-cutters. There are even rooms that would be excellent to rest in, showcasing care and thought put into the design.

Expect such things as Mosaic Walls that you must enter in order to progress, complete with eerie mosaic monstrosities, rooms of mirrors that are actually monstrous magic mouths with mirror teeth, a shit golem, a dwarven construct that can be ordered to turn into a wall, a technological oracle that answers questions if you fill it with coins, nefarious orcus worshippers, Yin/Yang trolls chained to walls sharing hit points, a library of illusionary books, a fountain containing a demi-goddess and a bizarro room with a glowing red gem and zombies on the ceiling that is sure to remain a permanent fixture in the nightmares of any younger players. Terrific. I am not even scratching the surface. These are all top notch entries (okay maybe the lonely shit golem is a bit too much for my taste but still), providing a balanced mixture of peril, conundrum, reward, place of safety and occasional pure fluff room or baffling mystery.

There is of course the age-old bugbear of plausibility, something which RotBB is not really all that interested in addressing. You’ve got companies of humanoids patrolling the place, bands of wandering demihuman thief guilds, an elf wizard and his lab, its going to be difficult for the intrepid simulationist GM to string all of this together or at least brush over it so as to appease the Versimilitude Gods. This is a funhouse dungeon, and if treated as a funhouse dungeon it is a very good one.

The Venger Satanis entries are 24. Alien Prisoner and  4. Dreaming in the Void, detected via his penchant for coloring outside the lines and using science fiction in a still mostly fantasy setting [1] and the Cthulhu reference is a dead giveaway. I am also once again reminded of his penchant for using unconventional NPCs Iä motherfhtagn!

Treasure is superior also, a plethora of wands and other consumables, often of non-standard appearance, interspersed with the odd magic weapon, usually a +1 or 2 with a bonus against a particular creature. I was thrilled with a mosaic weapon and a crystalline hammer. Strange alchemical salts and a bizarre quantum scrying gel are also among the more bizarre entries.

There is proper follow-up, discussion the consequences of failing the deadline, having the Holmesmen beat you to the tomb (a possibility which I can foresee happening provided the GM uses the cowardly conjurer’s Ring of Invisibility to its best effect) and of course victory, with the possibility of having the Baron’s wife become some sort of recurring monster villain if the PCs fail to complete the scenario in the allotted time.

Something I will give the module credit for which reminded me fondly of the Role Aids modules I will occasionally review is the use of both stats for hirelings and pre-made characters. Hirelings are reasonably well described but lack the single sentence punch of something like Slumbering Ursine Dunes [2]. Characters are described only in terms of a few keywords, quirks and drawbacks, splendid.

Some niggiling annoyances and the odd overly long or dense room description aside, The Return of the Blue Baron is a fine contribution to the halls of the OSR and exemplifies the spirit of collaboration, fun and excitement it once stood for. Its quality surpasses many semi-professional and professional modules. A terrific funhouse dungeon worth running, stealing from or otherwise partaking in. Well worth your time. 7.5 out of 10.

Check it for free out here.
If you dig it, one may purchase the POD here.

[0] In the old brown books, I believe the ratio of empty room to monster/treasure was almost 50/50. Anyone who understands the power of intermittent reward vs constant reward will see why.
[1] Though I would be the first to admit Mystara had ample room for technology by including the excellent Blackmoor adventures and technology in its ancient history. In fact, an ancient Blackmoor device under Glantri is responsible for magic in that setting.
[2] Though few could match the linguistic genius of Kutalik’s Slavo-Vancian farcecrawls

8 thoughts on “[Review] The Return of the Blue Baron (Blueholme); Second-time’s the Charm”