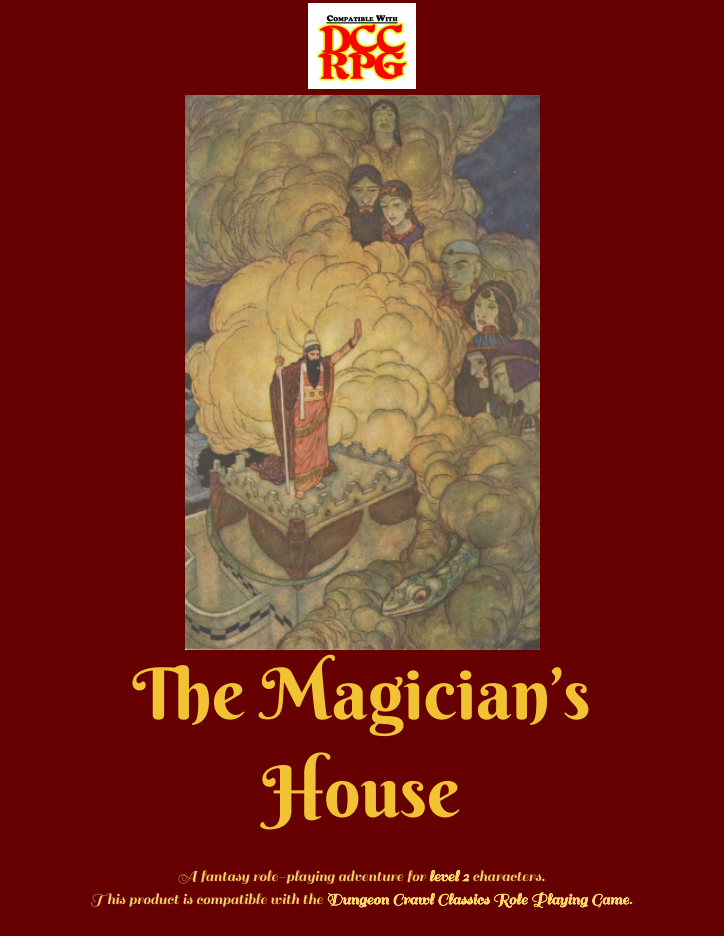 My apologies to my avid readers for the dearth in postings as of late. I have been busy on various projects, some of them work related, and it has been genuinely difficult to find the time to write the type of in-depth reviews I like to indulge in. There is a second reason. The frequent commenter and radical centrist Ray Weidner has, like many of my frequent readers, dumped his adventure on my lawn, hoping that, in one of my frequent drunken bouts, I would stumble upon it and give it a review.

Not realizing the Sishiphean Ordeal I had committed myself too I quickly acceded, and 127 pages later, I was left sprawling on the floor, shivering, tears streaking down my face in what was either utter sadness or profound joy as I gazed vacantly at nothing in mute incomprehension at what had just occurred.

The Magician’s House is that particular type of module that can come into existence only as a hobby project and a labor of love, painstakingly crafted, worked out in detail, and possessed of a creativity that is seldom seen in an OSR product. Forget the slavish adherence to the tropes of AD&D practiced by gatekeeping neckbeards or the spastic genre epilepsy of the Artpunk movement, MH brings us the wonder and majesty of Faery in shapes we know only from dimly remembered faery tales or the tales of Dunstany or Vance’s Lyonesse [0] with precision and focus. That is to say IF you are willing to sink in the time to figure out all of its interlocking parts and conceive how everything blends together.

The city of Blackrock is in peril! An army of shrieking demons marches inexorably closer, less than a week away from putting its people to the knife. The Duke puts out a call: brave and resourceful heroes are needed to recover the sacred  words that will unleash the power of the Sealing Stone. Words that have passed beyond the world – and so these  adventurers must pass beyond the world, into…The Magician’s House!

Paragraph intro. Pitch perfect [1]. The conceit is that the language of the Sealing Stone is a dead one that is spoken only by the wizard Mordank the Irregular, a spectacularly Vancian Wizard with all the quirks and intransigence that entails, who has not been heard of for three months. The Duke sends you to investigate and translate the words before the army arrives.

The first thing that is noticeable about Magician’s House is the rather overzealous use of different fonts and colors on the first page, to the raising of eyebrows of the prospective reader. After this the book is laid out fairly legibly, with about 2 pages per room for an 18 room extra-dimensional wizard’s house, dotted throughout with much needed hyperlinks and cross-referencing so the GM can keep track of the almost insane number of moving parts. As a tip for the next time I would recommend the author strive to fit tables on one page or column wherever possible and to make effective use of white space so a page does not start halfway into a new paragraph. As you march through its 127 pages with aching feet, the yearning for an index becomes almost uncontrollable.

The module appears to be a one-shot introductory module originally designed for the Dungeon Crawl Classics retro-clone, but it does deviate somewhat from the established eccentricities of DCC in that it is not a character funnel for 0th level characters and its style is more whimsical and ethereal rather then the Grotesque S&S aesthethic of most of DCC.

The amount of optional rules that are introduced can be overwhelming but do add to the overal enjoyability of the one shot. The first is a list of pre-made characters, each wonderfully described in a few evocative bullet points and given its own goals to complete during the quest, not all of them necessarily complementary. Names like Lithwick the Curious and Rictus the alcoholic halfling add to the charm, and both Win and Lose conditions are genuinely challenging. Obtaining 2.500 gp of wealth is fairly straightforward, but some goals include finding a cure for your alcoholism or a way into Faery!

A second mechanism, which I love and which is also present in Mines, Claws & Princesses, is that there is a ticking clock mechanic counterbalanced by a perparation mechanic! Immediately engaging! The PCs can elect to just jump in willy nilly or take 1 day to gather rumors, shop for additional equipment or train to get bonuses to hit. The shopping is suprisingly intricate and far exceeds the normal possibilities of equipment availability in DnD land. Various potions, from health draughts to love philters, may be bought, Blessings to increase Luck Points [2] and a wide variety of available henchmen, from common labourers to an honest to god Knight.

The rumor table is intricate to the point of overzealousness, with different rumors about Mordank and his house being available alongside those commonly available depending on your character’s background (mystic, criminal, learned, aristocracy etc.). While I feel the rumor table is more complex then it needed to be, the variety is appreciated and I am not going to complain that someone spent too much effort.

The House takes a while to wrap your head around, with multiple conventions being introduced one after the other. The map is more of a flowchart or a collection of hubs then any sort of physical location, which makes sense given that the wizard’s mansion exists across multiple locations and planes. A number of entrances are complex; talking magic doors, doors that open onto different locations depending on how far you turn the key, magic mirrors that can be opened with a password. It’s interesting and wondrous in the manner of Baba Yaga’s Dancing Hut [3] but I would recommend taking some notes before you spring it on your PCs. In addition, the house can either be dormant or be put on alert, which alters the random encounters or if the Party decides to smash the entryway instead of bypassing them. It’s all very intricately done.

This is an exploratory adventure of the proper sort. As you explore the mansion, its possible to stumble into a domed room on the moon, or wander through a magic mirror, enter a world-spanning library that holds all knowledge, and enter a deserted city, utterly silent or wander into Faerie, where time passes differently. It reminds me of the mirrors in A Red and Pleasant Land, only done as an actual component instead of a gimmick.

The adventure boasts that it is possible to complete it without fighting even a single time, and while this is very unlikely, it does appear to be technically correct [4]. Magician’s House seeks to establish its atmosphere of faerie and whimsy not merely through the aethetics of its inhabitants but in how they respond to intruders. Goblin manservants can be bypassed through clever roleplaying or the cunning use of a forged invitation, children wander the premises, Lords of Faerie can be entertained or tricked, its stunning.

This playstyle persists throughout the adventure, and it works because it is by the very act of interaction, roleplay and investigation that it may be brought to a satisfying halt. The module surreptitiously reinforces the type of play that is needed to resolve it satisfactorily and never are you required to perform a 180 and break out the napalm unless you want too.

The diversity of the encounters is similarly stunning. Nothing is old hat, goblins and faeries are recast into their primordial antecedents. Invisible children seek to play pranks on the interlopers, evil fae take on seemingly benevolent guises and can only attack if the PCs accept their hospitality, shapechanging Faerie Cats seek to vex and befuddle.

There’s time loops and sections where you must recite learned nonsense to the amusement of a pirate king. There’s fights with Goblin servants sitting on the backs of their fellows. Children with one of many sequestered enchanted rings, each of which has a password, most of which can again be learned through interaction or investigation. Winged musketeers battling rhino men over matters of love in the endless book-lined corridors of a library world. Wonder. Imagination. Whimsey.

There’s layout issues, 2 pages per room, a deal of work that must be put into it, and a playstyle that might not work for the more straightforward groups because it is just too damn weird. But if you take all that under consideration, Magician’s House is the type of adventure that you always knew could theoretically exist but was never published. It stretches the limits of what modules can be about, reminding me fondly of the wonder and creativity of The Atheneum of Yearning, Crystal Barrier, or The Dancing Hut of Baba Yaga.

There’s an extensive appendix complete with handouts, premade characters, new Faerie Patrons like The Mean Old Man, The Gentle Lady and the Lonely King and Spells like Create Magic Mirror and Create Golem.

Being a purist, I heartily recommend anyone playing this to do so using the DCC system for which it was originally designed to get full use out of the spells and patrons, though I can see no reason why Lotfp or even 5e could not serve in its stead.

The Magician’s House is worth powering through and taking the time to figure out. Layout issues shouldn’t distract you from checking out this gem. If you are the type of GM that is willing to sink in an hour’s worth of time you have got yourself one hell of a thrill ride into realms of wonder and enchantment. Forget the dissonant shrieking of the New Weird, this is oldschool fantasy, eldest of the eld. Awesome. 9 out of 10.

Check it out here.

[0] Weidner mentions Clarke’s Jonathan Strange & Mr. Norrel as a primary source of inspiration.
[1] I think it would add to the whimsical charm of the adventure to replace the traditionally menacing demons with something equally menacing but more absurd like Grues or Erms or Archveults or something.
[2] Luck is a seventh statt in DCC that may be burned to gain a one-time bonus on certain rolls or avoid an unpleasant fate. Some classes have the ability to regain burned luck points
[3] Weidner also mentions the Dancing Hut as a source of inspiration, though he refers to the one from Dragon Magazine 86
[4] The best kind of correct!

9 thoughts on “[Review] The Magician’s House (DCC); All shall love me and despair…”