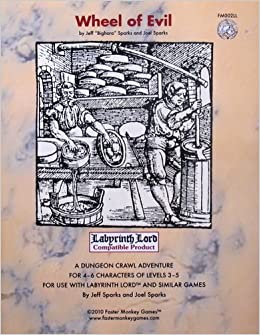 Another early OSR entry, Wheel of Evil shows us how much can be done with the classic elements and 24 pages if these are used properly, intelligently and creatively.

Picture the town of Renneton, famous for its cheeses. The cheese-aging caves that the town has been using since time-immemorial have been cruelly disrupted by marauding kobolds. The PCs are promised a share of the annual-cheese harvest if they solve the problem.

It sounds like the premise for the lowest adventure ever that you make the PCs go through when they are level 0 children to torture them before the real game or a typical Lotfp adventure and you discover its actually two aging homosexuals dressed as kobolds that use the cave to have perverted cheese-sex but none of this happens and its actually an awesome adventure.

Remember how I made a big stink about low level adventures not having to be about fighting fucking rats in a cellar? This one SEEMS to be like that, but it subverts it. It STARTS as somthing minor but the peril is much greater then it first appears.

The entirety of the plot is explained in two pages, along with a quick summary and some background so its easy to keep track of what has happened and whats going on. The PCs are equipped with a useless map and sent off to the Caves where they meet with various clueless locals. There’s a Giant Cheese called the Baron in the caves, the prize for the local king, which actually hides a distillery,  since the local church has outlawed alcohol. The low fantasy is so thick I can almost taste it. These would be retarded wastes of time in any other adventure but ALL OF THESE ELEMENTS ARE VASTLY SIGNIFICANT AND ADD TO THE GAME.

Room descriptions are given in boxed text in italics, followed by pointers for the actual content. In general if an area has the PCs escorted or accompanied by friendly NPCs I suggest its better to describe the general behavior of the NPCs first and then move on to room content but in this case it all works out. The text is a bit too long at times, at a max of three paragraphs, but for the most part keeps it at several sentences, paraphrased or ignored if not desirable.

You come to a ledge overlooking a bowl-shaped cave full of huge mushrooms, puffballs, and other fungus. A sickly glow comes from some of the molds. Somewhere ahead is the sound of running water.

The interesting thing about Wheel of Evil is how its complex and horrific structure unfolds from such an innocuous premise. Here we go again, time to murder the kobolds, thinks the party, only to be confronted with an eerie fungus forest or a crevice filled with a strange fungoid coating. And then the passage is collapsed behind them. And then they find the bodies of the missing cheese-workers, re-animated fungal husks throwing immature gelatinous cubes. And then they must venture into a subterranean nightmare of oozes, slimes, fungi and the hideous power of the Mold Master, a foul horror reminiscent of the House from Lanier’s Hiero’s Journey if I ever saw one. Before you know it, the Kobolds you have hated have become fast friends and you join them in fighting off these fungal terrors with bottles of booze and distilled kobold urine!

There’s a little bit of everything good in this subterranean romp, from negotiation, various obstacles, a surprise reveal of a diabolical plot and a smackdown against big fucking orbs of mind-controlling fungus horror at the end. There’s clever touches too, like the value of the shares depending on the state of the cheese harvest, something which the characters are (fairly) warned about. Some tactics will cause excessive damage to the cheeses and subsequently lower the reward.

It’s a Jeff Sparks adventure and that means treasure placement is immaculate, the quantity is appropriate, conscientiousness is rewarded, its all by the book stuff and the difficulty of the adventure is high. There’s a long 3-foot-wide tunnel that is underwater. There’s a green slime halfway in it, and Sparks basically tells you, “yeah if you were dumb enough to go in there you are probably going to die.’ Natural selection in the Dungeon. I like it! Expect fatalities as you would with any adventure that has as its chief antagonists oozes, slimes and fucking fungus patches of death.

Arguably a weaker section of the adventure is that the extensive cavern labyrinth is simulated using a bunch of checks but even here there’s room for cleverness and exploration, making it feel like an expedition. If you remembered crayon its much easier to backtrack, and various items or tactics can increase your chance of success. Even the cave-in doesn’t mean that the PCs are automatically railroaded, if they want to take the time and effort they can dig themselves back out.

There’s a strange, off-beat sort of charm to the whole thing, which dips its toe into gonzo with its fungus-zombies throwing slimes and its wonderfully corny kobold dialogues ‘Ze stinky cow skveezinks are ruining ze caves’ but it all makes sense and its well done, it never goes full retard. Quirky, rather then silly.

A welcome addition are a handful of new fungus monsters, some of them fairly silly, like a predatory mushroom that crawls along the floor like a snail, others variants of already available menaces. Weird and wondrous and horrifying. I mean fuck there’s a patch down a shaft which if you fall on it passes you through and deposits you, stripped of arms and tangled with fungus crap, in the bio-luminescent heart of the infestation, and fungus zombies start picking you up and carrying you in front of the Mold Master, to be drained of intelligence and turned into mind-less puppets. It’s fucking awesome!

Wheel of Evil is perfectly suitable for plunking into one’s low or dark fantasy campaign world, for inclusion in Spahn’s Chronicles of Ahmerth (as I believe was the original suggestion) and probably in Mystara. Its an offbeat take using classic DnD elements that is executed with craftmanship, precision and flair. Damn good. ****

8 thoughts on “[Review] Wheel of Evil (LL); Smells like Matango”