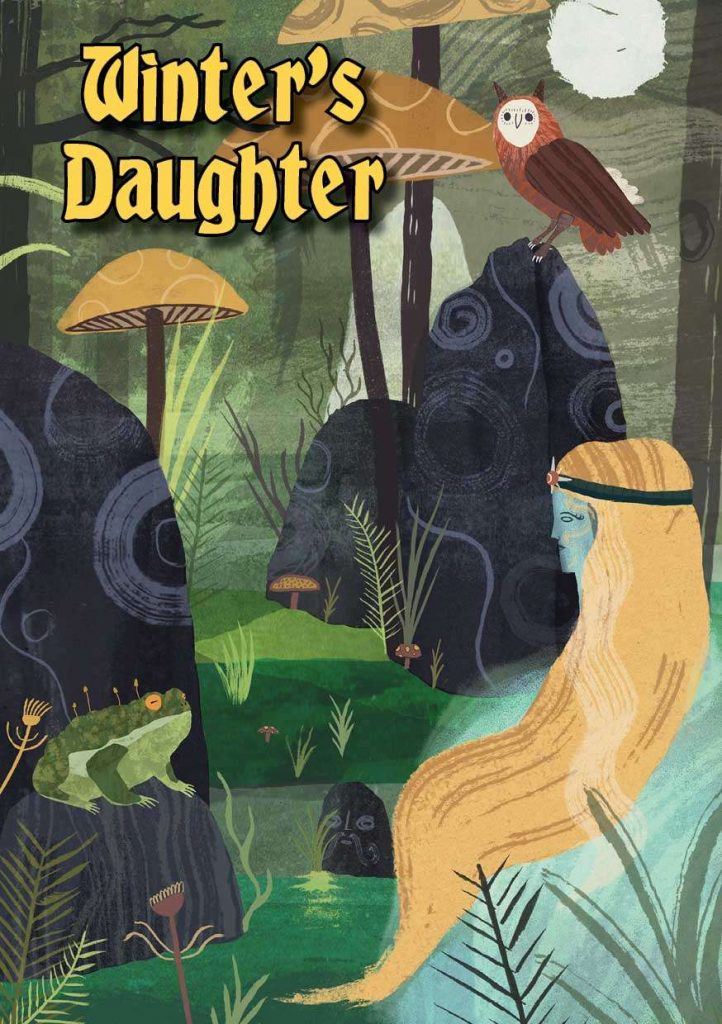 Finally. Finally someone gets it. Rather then divorcing DnD further from its fundamental components by the introduction of random noise, someone has gone back to the wellspring of fantasy and tapped from it deeply. Spencer, Dunstany, and beyond even that, to Faerie tales of yore. Combine this with modernized version of presentation that cuts out all the fat and leaves nothing but sweet, nourishing, life-giving content and you’ve got yourself 32 pages worth of damn good adventure.

Winter’s Daughter is an intriguing crossbreed between a standard tomb-crawl mixed with a social adventure where the PCs are actors in an age-old love story between a long-dead knight and a princess of faerie. Taking place in the excellent Dolmenwood Setting, a Dunstany-esque enchanted forest situated on the borders of Faerie and the real world, Winter’s Daughter is a fine low level adventure that manages to marry charming flavor with good adventure design.

The format is highly readable. Liberal use of boldpoint, sub-headers and bullet points is made to ensure that the essential elements of a room are conveyed without bothering to re-iterate in thick chunks of text the mundane trivia of a room. The result retains all of its flavor but can be scanned quickly and absorbed in the hind brain.

Door
Granite slab (seals the mound).
Overgrown (covered in lichen and
sweet-smelling wild roses).
▶ Moving the slab: Requires a cumulative STR bonus of at least 4.
▶ Breaking the slab: Takes 6 turns. Cumulative STR bonuses reduce this
time. (Minimum 2 turns.) If the ritual in area 2 is still underway, the hooded men
are not happy about the noise.

This is combined with a delightfully archaic feel. Nothing in this adventure feels like it is taking place in Lamps-powered-by-continuous-light Tielfing Arcane Archer Land. Armies of knights and Faeries fighting over control of the enchanted forests. Monotheism. Enchanted rings. Wards to seal off the Border between Faerie and the Waking World.

There is a bit of backstory and hooks before the adventure gets going but it is effectively compartmentalized for ease of absorption. In short, the terrible Cold Prince, who once ruled Dolmenwood in clutches of eternal winter, was banished to Faerie centuries ago. In that last battle, the Knight who was perusing a forbidden romance with his daughter fell and was entombed. Wrothful, he imprisoned her within a tower. The pact they swore means she still insists on holding the wedding feast until his spirit can be re-united with her.

The hooks here are all good and stem from classic faerie tale premise, like the lady contacting one of the PCs in your dream, to the slightly more grounded You Get An Inheritance as Distant Descendant of the Knight (possibly true or untrue) to the more workmanlike Tomb Robbery.

The faerie-tale feel is maintained impeccable throughout the adventure. Talking frogs, faerie Goblins with strange powers, Evil Enchanters sacrificing by Circles of Standing Stones, Faerie Banquets, which if tasted cause one to always yearn for the lands of Faerie. The atmospheric components really elevate this piece above your standard dungeon crawling fare.

That shouldn’t take away from the fact that the tomb proper is short but sweet. A second entrance makes for that all important nonlinearity and there is a classic mixture of lethal obstacles that can be circumvented by solving some sort of riddle, magical obstacles (a mirror that freezes anyone that looks in it that CAN BE MOVED! YAHAAH. INADVERTENTLY A WEAPON!), floating skeletons and delightfully christian chapels and wards. Good on Dolmenwood for using The One True God for maximum medieval flavor btw. Eventually you cross into the border between the Tomb and Faerie, drawn closer by the link between the princess and the knight.

And good job on the monsters. Contrary to popular belief I don’t hate reworking of classic monsters in adventures, I merely hate SENSELESS AND ARBITRARY reworkings for no discernable reason. Dolmenwood reworks its creatures so they become MORE faerie-like, MORE interactive. The trolls of Dolmenwood are mossivorous fairies. Their favourite delicacy is moss that has grown on the corpses of a sentient being. This leads them to murder. The reward for laying the princess to rest here is either faerie jewelry or a wish, appropriate to the situation.

There is within possibility, if the Artpunk movement does not smother it, the return of a DnD that embraces player agency and sand-box orientation, but also deeply sunken mythological or fantastic roots. A DnD that is flavorful without sacrificing direct useability. A DnD with worlds that exist beyond the confines of modules. A DnD that is shorn from bland corporate nonsense or self-referential navelgazing but does not fall into epileptic fits of nonsensical gibberish. And I say to ye, to look to modules like Winter’s Daughter to guide the way.

There’s some nagging to be done at the symmetrical map and ultimately it’s a relatively short adventure, perhaps 14 rooms, that can probably be completed in 1-2 sessions. There’s a good balance between social encounters and more deadly ones, with most of the adventure’s inhabitants being immediately hostile.

There are some open-ended possibilities not immediately within scope of the adventure that make for interesting possibilities. The Wards can be dispelled, opening the gate to the Domain of the Cold Prince. So too, merely having her wedding does not mean the princess is freed from her imprisonment in the forlorn Tower.

This is a relatively simple, short, atmospheric little delve into a place on the borders between Fantasy and Reality. It lacks the complexity of something like Magician’s House, but it does present a stunningly focused, charming jaunt into Dolmenwood that drives home the fact that DnD is not just well-designed non-linear dungeons, traps and slimes.

Shoutout to Frog Gode for the excellent recommendation.